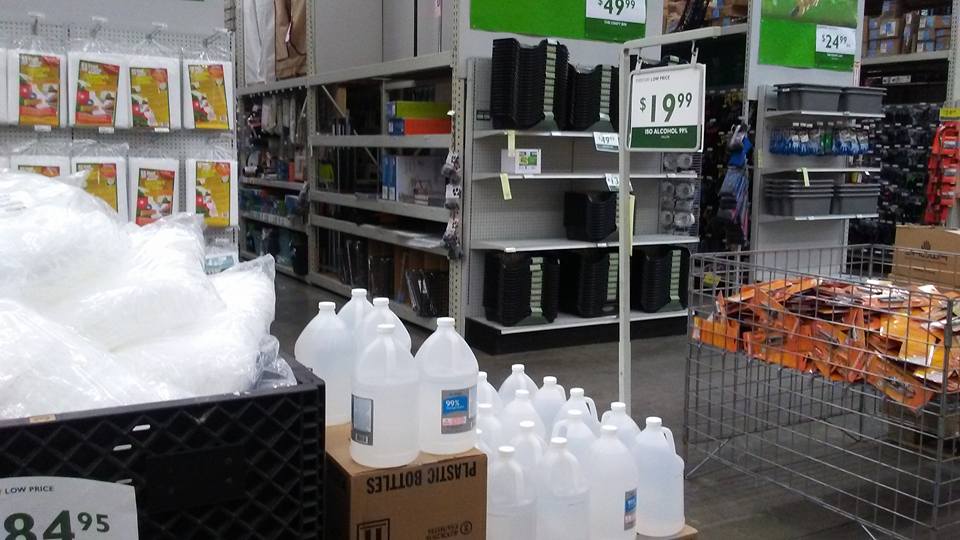 Gallons of rubbing alcohol, scissors, and gloves make up the center displays at the local Friedman’s. Trim bins are visible in the background.

This morning as I pondered over the many propositions on my California ballot, I thought about all the possible changes headed our way after November 8th. Would we have the first woman President? ( I sure as hell hope so!!!) Would the death penalty be struck down in my home state? (Yes please!) Will Weed become legal here? (more ambivalent feelings) And what will that bring?

Around here, the legalization of marijuana might be the biggest change of all. What effects on local culture would occur? Will growing weed become more mainstream? Is that even possible? So with those questions in mind, and change on the horizon, I thought it was worth sharing what it’s been like for me to move into what was, arguably, the birth place of Weed Culture: Mendocino County.

At the local Brewing company where I worked for the first nine months of living here, I was initially surprised that people made zero attempt to conceal that they were growers. They answered the question, “what do you do?” with “I grow weed,” although soon enough I learned that question “what do you do?” is pretty much locally verboten. Nonetheless they regaled me with stories of cutting crops down early to escape a raid and then immediately replanting or having garden hoses cut by zealous local deputies, primer poured into their generators, “go home weed scumbags” spray painted on their house. It sounded to me a bit like a summer camp prank war played by adults, only with more serious consequences like jail time. Others talked about local politicians protecting their own interests in regulating growing, saying boldly that the politicians were growers themselves.

In the local paper every day the police log, often hilariously pedestrian, includes a listing of people arrested for “marijuana cultivation,” almost always by the Mendocino Major Crimes Task Force. The politicians manage not to be mentioned, but I joke that they could use it as some sort of a census.

A couple years back, around this time of year, I had the honor of explaining what “honey oil” was to my then octogenarian godmother. In the newspaper for the second time that month, someone has set aflame their “honey oil operation,” in the process setting themselves on fire, resulting in third degree burns on 60% of their body. They probably should not have been lighting a cigarette in a room full of butane tanks. My mom’s partner suggested they were too stoned to know better. I can’t frankly imagine the amount of weed one would have to ingest to get THAT high. My elderly godmother, confused as to what the substance they were making actually was, wondered if it were something people laced weed with. I told her that no, in fact it’s the same plant, in a more processed form, popular since the advent of vape pens. Then I explain in detail what a vape pen itself is.

Why don’t you grow like everyone else? My godmother asks me. I remind her that despite local tolerance, itself, ambivalent and constantly shifting, Weed is still illegal and my attachment to our land is much stronger than my entrepreneurial urges. We’ll see though, if legalization comes about, how that might changes folks’ mind…mine included.

I am astounded to find this is the conversation we are having over dinner.

There is so much money to be made though, at least before it’s been legal. Around town people joke that’s why there are so many hair salons, auto body shops and boutiques, far too many for a town of our size. Weed money has to go somewhere.I did wonder who in our impoverished area was buying $200 jeans…

I thought growing up in the Bay Area that I was used to Marijuana being a part of normal life, not some boogey-man gateway fate-sealer drug but a counterpart to cigarettes and alcohol, the vaguely acceptable “safer” drugs. But up here, it is a whole other level. I find myself continuously impressed, even after a few years.

Here in the big box stores the center aisles are filled with gallons of alcohol, thousand of scissors and displays of gloves (see above photo). Turkey bags show up well before thanksgiving. They do a brisk local business in vacuum sealers, I’d bet, at our branch of Home Depot.

In Willits, the local high school health fair last year featured a workshop on the “environmental damage of marijuana grows,” along with the usual offerings of “tobacco dangers,” “STDs” and a guided tour of a fire truck. The school understands that a decent percentage of their student body will forgo college and go straight to growing in the hills.

In that same school, I overheard a teacher talking to a student who complained that the kid next to him stank distractingly of Ganja. The teacher, non-plussed, asked if the offending child seemed stoned, or perhaps, “his family is trimming right now and he just smells,” having no choice in the matter. She then counseled the bothered party to have more compassion. “Maybe he can’t help but smell that way.” I about laughed out loud.

Considering that legalizing Marijuana is on the ballot, I am interested to see what a loosening of laws up here might bring. What more could possibly come? Is this the peak Weed Culture now? Locals gossip about Monsanto buying up all the land and destroying small farmers’ livelihoods. Will all this soon change?

As it is, harvest season brings with it a cornucopia of cosmopolitan visitors to the area. Right now, the Mendocino hills are full of Spaniards, Ecuadorians, Australians and others, trimming away.The bars sound like a UN plenary all of a sudden. I see them wandering the aisles of grocery stores, exclaiming on all the American product options. The sides of the road are sprinkled with dread-locked backpackers thumbing for a ride. The kids at the high school tell me they call them “trimmigrants.” They walk around them on the sidewalks and gingerly pat their pit-bulls on hemp leashes.

Bereft most of the year of worldly company I am tempted to try and seek them out, for conversations sake. They probably think I’m the Feds. What will happen to them? Will legalization bring in more of the outside world? Will Bud and Breakfasts open all over the place? Maybe I should turn my ranch into a “U Pick It/Trim it yourself” thing, where folks can come up and trim buds right off the branch themselves, the way we did picking cherries when I was a kid. Weed Agri-tourism, here I come!

I am curious, and a little nervous to see what the future has in store for the sweet little area I’ve come to love. And I hope whatever happens, it’s for the best, benefiting the people who live here and not just corporate interests.