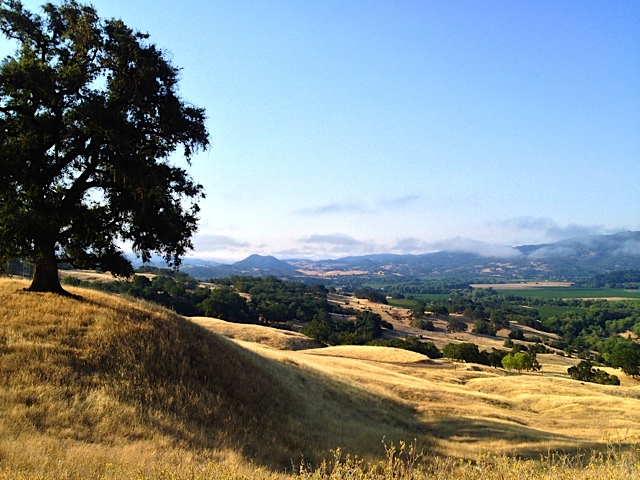 It’s been over a month now since I made the great leap. This is the time when it is finally dawning on me that I have moved to the country. It happened a little quicker than I expected. I’d thought I’d perhaps be in San Francisco part-time. Do six weeks in one place and then six weeks in the other. A gradual transition.

Then there was a job that interviewed me on a Saturday and wanted me to start Thursday of that same week. A job that was advertised as part-time but isn’t. The trigger for a sudden shift that has me still sorting out which house has which stuff.

For those that don’t know, as of the last week in September, I’ve relocated from Los Angeles, urban metropolis of 12 million, to my family’s cattle ranch between Hopland, CA (pop. 800) and Ukiah (pop. 15,000). It’s a big change. My morning commute has gone from an eight lane highway to a two lane country road. I see deer all the time, everywhere. The water goes out. Sometimes the day begins with a few hours of splitting wood (thankfully with a tractor attachment instead of an ax). I recently drove three hours to watch my cattle go to auction. As where I used to regularly close out cocktail bars, now I am usually in bed by eleven, even on a Friday.

The things that worry me are changing. In Los Angeles, I spent a lot of time worried about success and achieving notoriety, along with how I looked and losing those last five pounds. Here I worry more about losing a finger. That’s not to say I don’t spend time concerned with what the residents of Ukiah think of me. If anything with such a limited number of folks it matters more what each of them think, but it seems like a different set of criteria you’re judged by.

Pretty quick I figured out that the things I’d say to socially position myself in LA wouldn’t work well up here. My anecdote about tuna and corn being on pizza in Israel fell flat. No one was impressed to hear about my backpacking in Burma. My NYU degree is a liability. The more well-traveled, well-educated, or cultured you are, the more set apart you’d be. And the ultimate faux pas is to be seen as a braggart. Whereas in LA, that’s a viable profession and a personal hobby to a great many.

So in some ways this area inhabits the sweet spot described in Republican political fantasy and country songs. “Salt of the earth” folk. Family Values. Trucks. It is much whiter than I’m used to (there are seriously no black people, thank the lord there’s some Mexicans).People here are proud even when they are scraping by. The economy is based around agriculture.

On the other hand, it’s northern California- only two hours from San Francisco-so some contradictions come into that picture.

At the brewery where I’ve started tending bar, I get a chance to meet my new community one by one as they sit across from me. Two loggers, off from work thanks to a much needed day of rain, spent the day drinking organic IPA and well-crafted wheat beer for the same price as you’d find PBR in the city. Happy hour-$3. I doubt the organic part was a deciding factor for the man who ordered it but he didn’t balk at either.

A week later, a history teacher, from an even smaller hamlet nearby, stops in for a pint and we discuss World War I while he sips it. He could be from the city but he grew up around here.

As a community carefully balanced between hippies, hicks, wine folks and the working poor, the adjective used most often to describe it is “weird.” Since that is also the adjective most regularly applied to me, I am feeling cautiously optimistic.

When people ask me about my motives in moving up here, I usually emphasize my desire to be closer to family. My beloved godmother’s 89th birthday was the chosen date for my arrival and the time I spend with her reminds me of why I’ve come. I was worried about being lonely up here but actually I spent far more time alone in Los Angeles.

Most days in the mornings, before I head off to work, Helen and I take the truck to go see the cows or pump water, some little task that makes me feel like a “rancher.” We watch movies on her tiny TV in the evenings. It’s an intense change of pace. I don’t doubt there will be growing pains. I admit that I have had occasional bouts of terror when I cried in my car. But mostly I feel at peace. I have a gorgeous view of the valley as I write this. My future is here.