All the Single Queerspawn 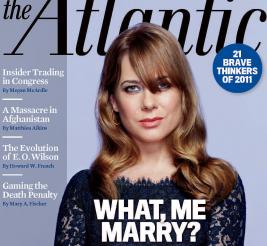 Greetings from the future! Ms. Bolick, I am a representative of what’s to come…

I can’t help but think that being raised by lesbians put me ahead of the game. Having just finished reading Kate Bolick’s tremendous article in Nov. 2011’s Atlantic Magazine, I was struck by the differences and similarities in our perspectives. I, too, had spent my mid-twenties in a long-term relationship (disclaimer: I got dumped and probably would be married right now if it had been up to me).
Still, I’d often reflected on the institution of marriage and struggled against the notion of “settling down.” I, too, had been raised by second wave feminist(s )who encouraged me to wear Osh-Kosh overalls and play with Tonka trucks and assured me that I could do anything I set my mind towards. And while I am almost a decade younger than the author I have also considered at times whether I have missed my chance at true love. Heck, I wrote a memoir to investigate whether I might have, that’s how much I’ve considered the idea. But I’ve found redemption from my heartbreak thanks to the facts of my upbringing.

I was raised in what might be fancifully described as an “Amazon Shangri-la,” a universe largely devoid of men but filled with intelligent, resourceful and colorful women. The particulars: In 1981, my mother gave birth to me, at home, in the company of a midwife, her lesbian lover and her best friend. When she and the lover broke up, they continued to parent together. When I was five my mom married (in a legally non-binding but lovely ceremony) a women she would then be with for the next fourteen years. When teachers asked me how many moms I had the answer varied depending on whom I was counting, which various ex-girlfriends I threw in the mix. Nowadays I stick to the number four, since four women have continuously supported me since childhood. Lots’ O’ Mamas!

That abundance mother-wise contributed to me having what I see as the perspective of the future Ms. Bolick imagines; the one in which women communally parent and support each other. My life has made clear that women don’t need men around to raise children and that an all female household can create a healthy environment for child rearing. I have never ascribed to the idea that family needs members of each gender to create balance and I grew up aware that marriage was an option not an obligation.

Do we need men? No, but I sure like them. Even the deadbeats and players on occasion. The words, “overcompensation,” have been mentioned in conjunction with my healthy sexual appetite. My attitudes towards sex are more progressive than most thanks to the sex education I received that emphasized that my body was mine to do with what I pleased. My mother’s sex positivity is reflective of the gay community’s stance as a whole and I credit my sense of sexual empowerment to having grown up in it’s bossom, so to speak. They (the gays)have a healthy perspective on sex- sometimes you sleep with someone and something comes from it, sometimes you sleep with someone and zilch. Both kinds of sex are fun. There were multiple points in the article that led me to think sex positivity is the hinge on which women successfully navigating the future swings.

I know in my own experience, that I have profited from my own sexual hedonism. The article posits that “hook-up culture” is something modern college women endure, with 80% of them generally bowing out of the race in response. I was one of those 20% of women who were actually having sex and it was GREAT! The prudes on the sidelines have only themselves (and their parents) to blame. The assumption that casual sex rarely leads to enjoyable, if not necessarily monogamous, relationships is one I’d like to challenge as well. Almost all the serious relationships I’ve been in, even the monogamous ones, started out as hook-ups.
And while the line “Or is it that pornography endows the inexperienced with a toolbox of socially sanctioned postures and tricks, ensuring that one can engage in what amounts to a public exchange according to a pre-approved script?” really resonated with me, I couldn’t help but think that so much of life is a performance and it’s feels good to have a lingua franca, even if a flawed one, to start out from. We may have to work towards sensuality. Sensuality is intimate. We may have find balance between freedom and callousness cross gender when it comes to sex. But our era of “heady carnal delights” I think need not be stifled.

However if 80% of college kids disagree with me, it would be in their hands to change it- like Gandhi says, be the change you wish to see on the world. Virgins continue to be hot property through their early twenties at least, so they aren’t taking on that big of a social liability. Wear your purity ring and I’m sure your prince charming will arrive. Just don’t bother the rest of us over sleeping around. Live and let live should be the sexual standard and then things would work themselves out. I am sorry for all the young women who have had less than satisfying sex lives but I can’t help but hold them partially responsible for their own malaise. Sexual satisfaction thrives on communication and I doubt these women are being honest with themselves or their mates about what they desire. The women who are upset are as I see it holdover of the days in which catching a man with one’s virtue was commonplace. If one views sex as a bartering tool for commitment, times are tough. But if one views sex as a mutually pleasureable bonding activity that exists for its own sake, things aren’t really that bad. Lots of men are happy to have sex, that is generally not a problem, and personally I want any commitment to be based on desire not blackmail.

There are compromises to be made in the marriages of the future, perhaps some in terms of expectations of monogamy, but honestly, humans have never excelled at that (See: Sex at Dawn, great book!). Regardless, there are many alternatives to the current norm. The prevailing insistence on getting married at a standard age and in standard fashion I ascribe to the conformist instincts of humanity. The sister heroes of yore: Ms. Millay et al. were artists on the fringe of society and artists are non-conformist by nature. I have been shocked to find that as much as I thought of my liberal girlfriends as progressives, even radicals, they’ve all lined up for relatively conventional lives. Maybe they’d have home births, although so did their mothers, maybe they’d take pole dancing classes and proudly own vibrators but they would get married, stay monogamous, bare children and balance careers with all that. They would try to live up to standards set up in the media and when they failed they would berate themselves. The single ones all admit that if they only could find the right man to settle down with, well then they’d be happy. Our culture is so pervasive, it can force us all to “swim upstream.”

Our generation(s) has been led to believe that somehow between 25 and 35 we are supposed to jam building a career, finding a mate and starting a family. All while looking good and keeping a clean house. It’s stressful just summarizing that. The truth is we each prioritize in a slightly different manner and our lives show the results. Despite the gains made by our second wave mothers many of us still intertwine our sense of identity with our success in maintaining a mate and family. As much as we may value the idea of career it is generally secondary, as it often was for those who raised us and endowed us with their dreams. Even my lesbians hold their personal accomplishments above their professional ones. They would all say they are most proud of being my mother. They would argue feminism wasn’t an attempt to devalue the domestic sphere as much as one to elevate and redeem it, coupled with an expansion of the possibilities available to women outside it.

The consequence of living in an era post- women’s movement may be that at times I feel like good men are hard to come by. I have been kept sleepless on occasion, exhausted but strung out on visions of growing old alone or a future in which it will be me and a mass of aging lesbians, but in those moments my mothers lives act as a talisman, a reassurance that You are the only one who can make happiness for yourself. I have seen them manifest the lives they want to live. They keep their own company and enjoy their own eccentricities. They can be annoyingly self-satisfied. They are strong and rarely lonely.

My mothers reflect the modern woman. They are all four college educated professionals who have been leaders in their fields while maintaining warm and enriching personal lives. They are my heroes and my inspiration in life. They have opened my mind to all the possibilities both in terms of seeking self-satisfaction and forming family. Maybe I will marry, maybe I’ll stay single, maybe I’ll raise kids with friends. They have done all of the above and excelled at it.

Being raised by a quartet has allowed me to think critically about the merits of the nuclear family and I am intrigued by the alternatives. Why not take abundant advantage of the choices offered to us? My parents’ arrangement, four moms, two kids worked out well. I have ample friends in the gay community who might be interested in co-parenting. I agree that “there are many ways to love in this world.” I don’t think it behooves us to limit ourselves when it comes to love.

So my plan to navigate the new reality in which men are scarce and good men even rarer is- I plan to continue to sleep with men I am attracted to, in whatever organic time-frame that occurs and keep my mind open to romantic possibilities without too much concern for my age. My mothers’ lives assure me that sexuality is not defined by how attractive society finds you. My mom gets hit on all the time by members of both sexes and she’s in her late fifties. Sexiness is a state of being without an expiration date. I will get married if the right person presents himself and if not I will nonetheless live a full and happy life. I know that second part is mine to control and that makes all the difference.