Thanks Zach Wahls, from all of us Freaks! 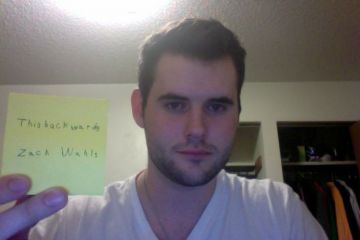 Is that a halo above his head ?

Zach Wahls has gone viral. The video of the handsome young man speaking to the Iowa legislature on the subject of his lesbian mothers has been viewed over fifteen million times. He has become the face of children with gay parents for a large part of society. He sat down with Ellen Degeneres, he’s writing a book. The response to the video has been overwhelming. Though it originally came out last year, in the past few weeks it’s been sent around the internet with the kind of fervor usually reserved for cat videos. I was sent it by at least thirty Facebook friends, each of whom must have thought upon seeing it- I know someone with gay moms, I better send it their way. Thanks guys- I got it.

Reading over what people posted in the comments section, I was struck by how many people’s minds were changed by the viewing, Marines and Baptists who, once devout homophobes, had been shown the light. There is something about the speech he gives that is so identifiable, so trustworthy and persuasive that it makes you want to vote for him,(many people have suggested he go into politics) or buy whatever he’s selling. The comments on the video lean heavily towards proposals of romance, from both men and women. If I didn’t realize that I’m ten years too old for him, I’d probably give it a shot. It’s no surprise everyone wants to marry him.

He’s just so perfectly American. Sweet, Wholesome, perhaps even slightly sanitized- though when he offered the Reddit community the chance to ask him anything he was refreshingly candid about his porn viewing habits. He comes across as hardworking, loyal and achingly earnest. If you didn’t pay attention to his being an engineer, you might assume he’s a farmer- he’s got a touch of salt-of-the- earth charm. I think it’s the line- “We’re Iowans. We don’t expect anyone to solve our problems for us. We’ll fight our own battles. We just hope for equal and fair treatment for our government.” In another moment he goes a tad Italian, his hands folded in front of him, a slight jersey lilt to his voice. Then he strikes a more preacher like tone, a man on a pulpit. He settles eventually into the stride of a natural orator, passionate but in control. He lists his academic achievements and tells the chairman he thinks he’d make him proud if he was his son.

He is the perfect representative for us, I just wish that we didn’t need someone quite so Perfect. We shouldn’t all have to be Eagle Scouts. Our families right to exist shouldn’t hinge on being well spoken, well educated and well behaved. We should allowed to be starving artists, rabble rousers and dilletantes like everyone else…

I also felt some concern with his ending. He says, “In my 19 years, not once have I ever been confronted by an individual who realized independently that I was raised by a gay couple, And you know why? Because the sexual orientation of my parents has had zero affect on the content of my character.” Because being raised in the gay community had a huge influence on who I am (check out my blog post for Inculture parent magazine, “Why Gay Parents are Superior”). Why are we back to pretending we are like everyone else?

I spent a bit of time playing normal in the media myself. In seventh grade- 1993 – I appeared on CNN to speak about having lesbian moms. The soundbite chosen was very much in line with Zach’s perspective. I said something to the effect of, “We’re like any other American family. We eat dinner, they help me with my homework, we watch television.” The discourse centered around us proving our normalcy, as though that were the trade for equality. We promise we’re normal and therefore deserving of your acceptance. In the years that came after, I slowly changed my arguments in the media towards a perspective that celebrated the differences in our families instead of trying to downplay them. There is something frustrating and sad for me in the fact that twenty years later we are back in the same place dialogue wise.
That being said, I have always believed in dealing with what is instead of dwelling on how we wish things were and in that case Zach Wahls is the perfect person to convince middle America that Gays parenting people is alright. I am much less normal and it would be a burden to have to pretend otherwise. So thank you Zach, from all of us freaks. Fight on!