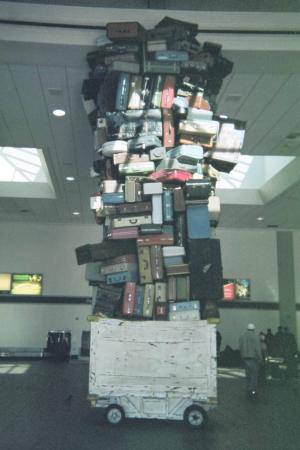 I’m in the audience of a game show called “Baggage.” A show which features a sexy bachelor or bachelorette who chooses between three suitors, each of whom have three suitcases set in front of them. Those cases hold secrets that might make them less attractive mates. Stuff like sexual proclivities and past addictions, obssesions, quirks. I collect my nail filings. I used to be real fat. One guy’s secret was that he lived communally- what horror!

As the show goes on they have to open those suitcases and admit to being the freaks they really are. Okay my choice of words not theirs… and We as an audience get to encourage the contestants to harshly judge their prospective mates. The camera pans to reveal shock and disgust in our faces. We have a guy showing us the appropriate faces to make. Jerry Springer the host then asks them to explain why this particular piece of information was a deal breaker-” So why can’t you stand the idea that he collects Barbie Dolls? Tell me about that…”

I am wearing a cute summer dress as advised by the same casting service that has promised to pay me in cash at the end of the day. It’s always fun to check out what people choose to wear to these things, their interpretation of the dress code. A lot of personal taste can come through “Business Casual”.

Between takes I turn and scan the rows behind me, looking at the people who have come here to be paid in cash like me. I settle my gaze repeatedly on a handsome blond man, hair spiked with gel, sitting next to an aging bottle blond girlfriend.
There is something about him that makes me think “maybe you were once a woman” Something in his rocker/surf presentation, something in the cheekbones or the eyes. Gender is of course a reading of a set of culturally determined cues and as I steal glances I think- His hands aren’t so big- He is big but no larger than the bigget and butchest of my moms-I imagine the face before the hormones, what that might look like.
I think to myself that it is all so subtle that only someone well-versed in the possibilities of gender queering like me would notice. You were passing and then I caught you. Then I wonder why I care at all. This person is living, passing as the gender of their choice so what do I care?

I love trans people- why am I staring at this one? Maybe because it was so close, I just couldnt be sure how to categorize them, not even cultured ol’ me. That would be the ultimate suitcase secret for a show like this-but then it would most likely end with the person being rejected for being too different to accept and what fun really is that? Not my kind.
Don’t get me wrong I love judging strangers just as much as the next guy- when one lady’s secret was “I only do it on my sex towel”, I was quick to think- No way, what freak that person is- how neurotic and bizarre.But right after that thought was the consideration of what could have possibly convinced these people to offer up themselves for judgment? That was the real freakiness of the whole thing for me. Did they need the cash worse than I (Hardly Possible)? Did they think they stood a chance at finding love through this hell (implausible)? Did they just want the attention? And what did that mean?

My godmother Helen gave me David Foster Wallace’s “This is Water” this last weekend. It’s the one commencement speech he gave before he died. The book had bits of wisdom on each page, small bites of it so it was perfect for the environment of reading during filming breaks.

It seemed to me it was saying that it was worthwhile to consider the experiences of others, to question
ones own natural self centeredness. That you aren’t the only person who matters, there are others and they count too. That you get to choose to remove yourself from the position of judge and jury of the world around you and the needless suffering of ego. I think about how from a very young age I have known that thanks to my many mothers I am different, that there are others with different perspectives than mine. I have always known that people think they are right often when they don’t know any better. This perspective has made me less self-righteous in my own pronouncements.
I think that being queer teaches you not to take for granted a lot of things that others don’t think about.
I read an affecting article about a young trans child and her parents and their attempts to navigate the world. It isn’t easy to be different but it is an education.

Back to Baggage- I spent the day mulling over what might be in my suitcases and how I felt about Secrets in general (Anti! Definitively so!). I checked out everyone else in the room and made uneducated guesses about what could be “wrong” with them. I felt blessed that this wasn’t the only forum in life for getting laid.