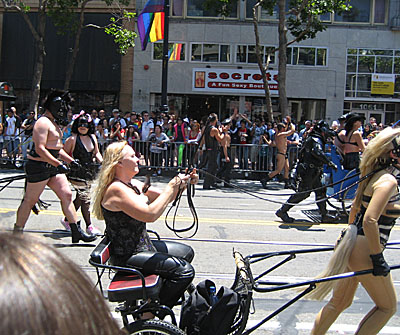 Okay, so I am totally biased because my mama was Leather Marshall at Pride this year. This mean she gets to ride in a car and wave, only she had a human pony cart instead- OMG! If it is surprising that given my expressed enthusiasm, this post comes so late after the fact, it is only due to my own sloth. I apologize-anyhoo- Pride is known to have good and bad years. Last year, for instance I remember noticing a strange segregation. It felt like there’s the Latino section, there are the Black people by the hip hop stage, there’s leather alley. Bad year. This year the set up wasn’t remarkably different but it didn’t seem quite as apparent. Anyhow this year= good year because Mom was a total gay celeb for a hot minute. Now considering how much work she does for the community the parade route seems like a quick trip through the limelight in return. But then she’s not doing everything for attention, like I do. I thought she looked very regal. When she came by, me and my brother jostled our way to the front of the crowd and started screaming ” MAMA, MAMA!!!!”
My brother, younger and less exposed to mom’s lifestyle, was mostly worried about what she would be wearing. When she arrived with her human equine, I think my brother was thankful she wasn’t the horse. I think he’d perhaps expected her to arrive in leather lingerie like Doms in the movies. In comparison, her sparkly corset and black leather pants were modest indeed. So there we were screaming our fool heads off over the poor souls stuck between us and the parade route. The man next to/under me said ” Honey, I have eardums and i’d like to keep them”, to which I replied, “When’s the last time your mom was leather marshall?” Then he told me I could yell as much as I wanted.